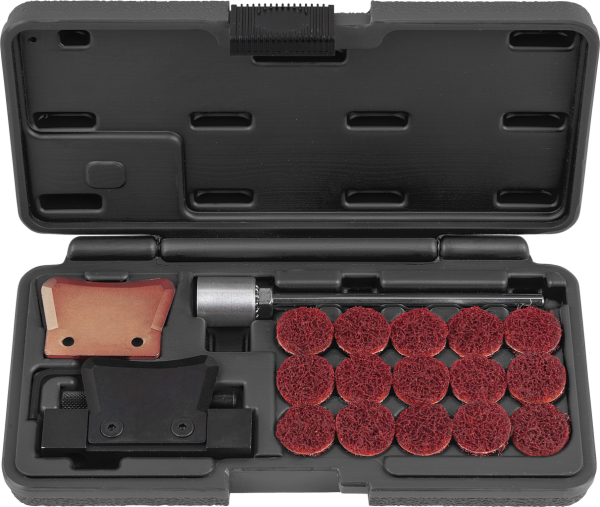 Anyone who has to remove a glued oil sump most likely won‘t have an easy time of it. That’s because the sumps are, as a rule, stuck very solidly to the engine block. Tool specialist KS Tools has a new oil sump separating and cleaning set in their product range with the product number 150.1585 which is precisely tailored to this problem. The tools included allow firmly seated oil sumps to be loosened from their adhesive bonding gently but effectively. Besides this, the set contains special felt pads with which the glue residues can be easily removed.

Oil sumps are increasingly glued into place with a sealant. This makes it more difficult to loosen the sump and more often costs a great deal of time. Anyone trying to lever the sump off by force will very often damage the sealing surfaces. That‘s because the adhesive not only exerts a bomb-proof grip, it can sometimes also be extremely hard. On top of that, there is only a tiny gap between the sump and the engine block into which the mechanic has to insert his tool. If they take a cutting blade to it, they are living dangerously because this tool just isn‘t stable enough: it breaks off easily or can sometimes cause considerable injury if it slips! Also, more and more parts are consisting of soft materials such as aluminium. If, then, a screwdriver is used to lever the sump off, the sealing surface will quickly become damaged. And not least – awkward accessibility often exacerbates removal.
With the new oil sump separation and cleaning set the mechanic can remove glued oil sumps and also housing covers gently and safely. The heart of the matter is the two slim blades which can be driven between the sump and the engine block from the side or the rear using a hammer. Also included are a hard steel blade and a softer brass blade. The professional vehicle mechanic thus has the right tool on hand for each material and doesn‘t risk causing damage. The knurled handgrip can be inserted into the basic tool from below or from the side depending on the available space. This allows the oil sump to be loosened without major damage.
If the oil sump has been removed, the mechanic should clean the sealing surfaces. To this end, the tool set contains 15 small felt pads which can be clamped into a battery or compressed air driven tool by means of an appropriate fixture with a long cylindrical shaft. Powered in this way, the felt pads remove the adhesive residues gently and completely. The pads consist of a synthetic fibre with abrasive grit which cleans the adhesive surfaces thoroughly. Other components can, of course, also be cleaned with it, such as the sealing surfaces on valve covers.
The oil sump separation and cleaning set consists of a total of 20 parts: a base unit (blade fixture), a steel and a brass blade, a knurled handgrip, 15 felt pads and a fixture for the felt pads with a 6 mm cylindrical shaft.
The set comes in a practical plastic case.