Power impact screwdriver is good for the back 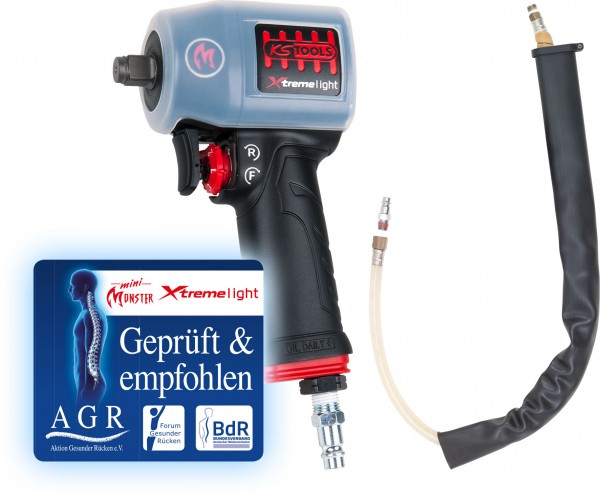 Working in the workshop is difficult for car mechanics. Bending down, carrying heavy parts and neck twisting is all part of it. The fact that an impact screwdriver is not lightweight does not make it any easier. KS Tools has developed a power screwdriver that is also good for the back - the miniMONSTER Xtremelight. It has not only been awarded the seal of approval by Aktion Gesunder Rücken (Healthy Backs Campaign), but is also extremely strong. The new miniMONSTER Edition impact screwdriver also rotates at 10,000 idle revolutions. And its release torque of 1,390 Nm is also impressive. At the same time it is very quiet, at just 113 decibels. This also has a relaxing effect on the hectic pace of the workshop.

Anyone who deals with an impact screwdriver on a daily basis knows that it’s no featherweight. Because you only use one arm at a time to work the screwdriver, this arm quickly becomes tired. The new lightweight miniMONSTER Xtremelight lives up to its name. It has been awarded the seal of approval by Aktion Gesunder Rücken, because it is particularly easy to work with, thanks to its light weight. Even its brother, the little miniMONSTER impact screwdriver, sets the bar high in its class. But the new high-performance pneumatic impact screwdriver goes one step further.

It protects the muscles and fits comfortably in the hand
It goes without saying that the miniMONSTER Xtremelight meets all safety requirements. But it can do even more: it noticeably reduces all stresses and strains in the neck, shoulder, arm and back muscles that typically come with screwdriver work. Its ultra-light composite housing of just 1000 grams literally makes light work of your screwing tasks. It is also practical that the torque can be selected in three stages. In this way the power is optimally transmitted.

Operation with one hand
In addition, the impact screwdriver can of course be operated with only one hand, regardless of whether it belongs to a right-handed or left-handed person. The left/right one-hand switch lever is smooth-running and adjustment to the user is child‘s play, while the non-slip handle ensures a secure hold in the hand.
As it is not only the back that is exposed to great stress in the workshop, but also the hearing, this screwdriver hardly makes any noise. It is already very quiet by nature with its 113 decibels. If you use a noise reduction hose, it‘s up to 40 percent quieter. This makes working with the new miniMONSTER Xtremelight from KS Tools particularly pleasant.