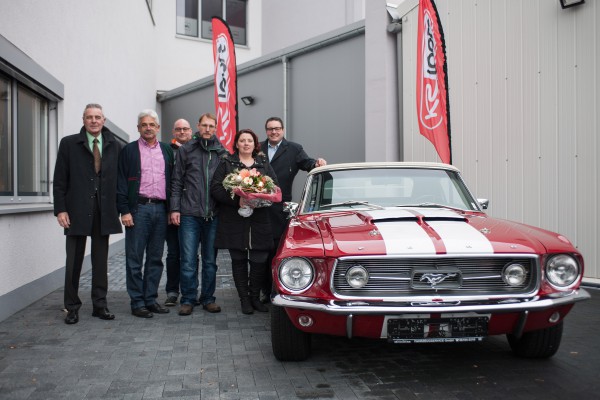 The Ford Mustang is a legend. Anyone who owns a classic like this one can consider themselves lucky. Holger Roloff from Nordhausen is the lucky winner of this particular icon. He entered a competition run by KS Tools, in which trade fair visitors and workshop customers of KS Tools had been trying their luck since November 2015. He threw his ticket into the lucky box at the in-house trade show in Berlin, and with that, the 1967 Mustang Cabrio is now going to its new owner. The draw took place on 8 November 2016 under notary supervision in Heusenstamm.

„For the last year, our 1967 Ford Mustang Cabrio has been turning heads at many a trade fair in Germany,“ declares the KS Tools project management. „When all is said and done, motor sport fans are not the only ones to fall in love with this car. Lots of people long for a car like this.“ And that was exactly the reason why KS Tools decided to include this classic car in its prize draw. The prize is worth around 45,000 euros. The Mustang did not just support KS Tools at its trade fairs; it also supported the competition, in which it was the first prize. Trade fair visitors have thus had the opportunity since November 2015 to win this unique car.
The red Mustang, with its distinctive rally stripes, is in excellent condition. Only recently, it has been completely stripped, sandblasted and re-sprayed. Naturally, it has new, black leather seats, as well as a new convertible glass roof. Munich‘s US car specialist, Berger Cars, has also reconditioned the engine and installed an „Edelbrock“ intake manifold with a new carburettor and a special ignition system. And naturally, this complete restoration also included full chrome indicators. A Mustang like this one is enough to set any classic car fan‘s heart racing. KS Tools presented Holger Roloff with his car on 12.12.2016 in Heusenstamm, at the same time making him part of the Mustang legend.